This has to be one of the best singles ads ever printed. It is reported to have been listed in the Atlanta Journal.

SINGLE BLACK FEMALE seeks male companionship, ethnicity unimportant. I'm a very good girl who LOVES to play. I love long walks in the woods, riding in your pickup truck, hunting, camping and fishing trips, cozy winter nights lying by the fire. Candlelight dinners will have me eating out of your hand. I'll be at the front door when you get home from work, wearing only what nature gave me.... Call (404) 875-6420 and ask for Annie, I'll be waiting.....

Over 150 men found themselves talking to the Atlanta Humane Society.

Posted by Kenny And Angela's Adventure at 5:45 AM 9 comments:

Into a Belfast pub comes Paddy Murphy,
looking like he'd just been run over by a train.
His arm is in a sling, his nose is broken,
his face is cut and bruised and he's walking with a limp
"What happened to you?" asks Sean, the bartender.
" Jamie O'Conner and me had a fight," says Paddy.
"That little shit, O'Conner," says Sean,
"He couldn't do that to you,
he must have had something in his hand."
"That he did," says Paddy, "a shovel is what he had,
and a terrible lickin' he gave me with it."
" Well," says Sean, "you should have defended yourself,
didn't you have something in your hand?"
That I did," said Paddy.
"Mrs. O'Conner's breast, and a thing of
beauty it was, but useless in a fight."

An Irishman who had a little too much to drink
is driving home from the city one night and,
of course, his car is weaving violently all over the road.

A cop pulls him over.
"So," says the cop to the driver,
where have ya been?"
" Why, I've been to the pub of course,"
slurs the drunk.
" Well," says the cop, "it looks like you've had quite
a few to drink this evening."
"I did all right," the drunk says with a smile.
"Did you know," says the cop, standing straight and
folding his arms across his chest,
"that a few intersections back, your wife fell out of your car?"
"Oh, thank heavens," sighs the drunk.
"For a minute there, I thought I'd gone deaf."

"It was terrible, Brenda. He fell into a vat
of Guinness Stout and drowned."

"Oh my dear Jesus! But you must tell me truth, Tim.
Did he at least go quickly?"

Mary Clancy goes up to Father O'Grady after
his Sunday morning service, and she's in tears.
He says, "So what's bothering you, Mary my dear?"
She says, "Oh, Father, I've got terrible news.
My husband passed away last night."
The priest says, "Oh, Mary, that's terrible.
Tell me, Mary, did he have any last requests?"
She says, "That he did, Father."
The priest says, "What did he ask, Mary? "
She says, He said,
'Please Mary, put down that damn gun...'

AND THE BEST FOR LAST

A drunk staggers into a Catholic Church,
enters a confessional booth, sits down, but says nothing.
The Priest coughs a few times to get his
attention but the drunk continues to sit there.
Finally, the Priest pounds three times on the wall.
The drunk mumbles, "ain't no use knockin,
there's no paper on this side either!"

Posted by Kenny And Angela's Adventure at 5:35 AM 4 comments:

The dream is starting to feel real.

We have been busy cleaning things out putting stuff in one pile for a sale and something's on Craigslist and the rest to the dumpster.

I have (had) this enclosed trailer that I used when I was in the handyman business. We spent Thursday unloading all the tools and things I used in the business and then reloaded it with all the things that belong to my son.

He needed a place to store his motorcycle and other stuff so I gave him the trailer to keep.

Not sure if anyone or everyone that was getting ready to go fulltime had the unsure and mixed feelings when they realized it was not just a dream but it is really  happening.

We have started putting things in the 5th wheel that are going with us. Then comes the task of where to put it and then trying to remember where it is.

Now that the painting is done it’s time for tile in the kitchen,bath we bought the tile Friday and hope to have it installed sometime this coming week.

We are planning (hoping) to get the house on the market by April 1 (Fools Day) and be living pretty much in the 5th wheel in the driveway 1. To keep the house cleaner  and 2. Keep the dogs and the hair out of the house.

I’m the impatience type that wants everything done yesterday. Angela says I need to slow my head down that its going to happen when its sup post to happen…..What ever that means..

I better get off here and think about what's next .

Posted by Kenny And Angela's Adventure at 4:57 AM 17 comments:

This is How to Explain How We Came to Be. The New Generation would Never Believe the Old Fashion way. 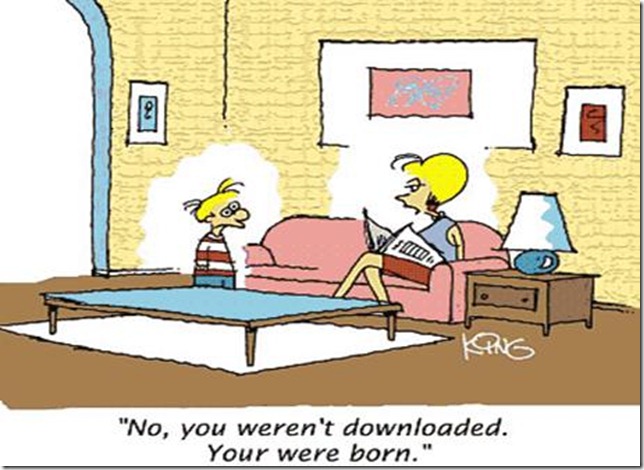 Daddy , How was I Born??
A little boy goes to his father and asks 'Daddy, how was I born?'
The father answers, 'Well, son, I guess one day you
will need to find out anyway! Your Mom and I first got together in a chat room on Yahoo. Then I set up a date via e-mail with your Mom and we met at a cyber-cafe.. We sneaked into a secluded room, and googled each other. There your mother agreed to a download from my hard drive. As soon as I was ready to upload, we discovered that neither one of us had used a firewall, and since it was too late to hit the delete button, nine months later a little Pop-Up appeared that said:
Scroll down...You'll love this ....

Posted by Kenny And Angela's Adventure at 6:04 AM 6 comments:

Not much going on here just sitting and..

Our it should be watching paint dry???

Posted by Kenny And Angela's Adventure at 5:00 PM 7 comments:

Worried about squirrels getting into your bird feeder??

What the hell is that line made of??

Posted by Kenny And Angela's Adventure at 6:09 AM 7 comments:

sale. (Boring) We are down to about a week from being done with

the inside painting (Boring) Angela has started to go thru some

pictures and getting rid of things she doesn’t want…(Boring)

things in another pile for a garage sale. (Boring)

I would tell you what we had for dinner last night but that would be?  (Boring)

This is something I found and think it says it all. We have two

rescue mutts in our family right now plus a bird..

Posted by Kenny And Angela's Adventure at 5:06 AM 11 comments: