A man on his Harley was riding along a California beach when suddenly the
sky clouded above his head and, in a booming voice, God said, 'because you
have tried to be faithful to me in all ways, I will grant you one wish..'
The biker pulled over and said, 'Build a bridge to Hawaii so I can ride over
anytime I want.'
God replied, 'Your request is materialistic; think of the enormous
challenges for that kind of undertaking; the supports required reaching the
bottom of the Pacific and the concrete and steel it would take! I can do it,
but it is hard for me to justify your desire for worldly things.
Take a little more time and think of something that could possibly help man
kind.'
The biker thought about it for a long time. Finally, he said, 'God, I Wish
that I, and all men, could understand women; I want to know how she feels
inside, what she's thinking when she gives me the silent treatment, why she
cries, what she means when she says nothing's wrong, why she snaps and
complains when I try to help, and how I can make a woman truly happy.’
God replied: 'You want two lanes or four on that bridge' ? 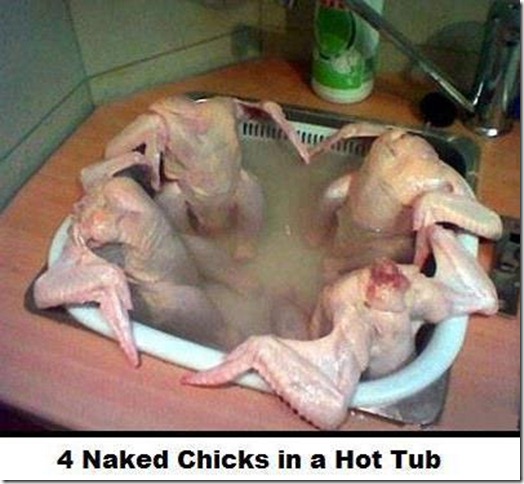 Posted by Kenny And Angela's Adventure at 5:58 AM 7 comments:

Another week just flew by and into the record books it went.

I thought living in the RV, life would be getting easer not so.

Seems like between work and going here and there to get supplies  my weekend’s are not like I had it pictured.

I do find time to relax between chores like half the day Saturday was spent waiting at the house  for a guy to come and buy a few pieces of furniture.

First problem was he had a small truck and bought a love seat a lazy boy chair a dresser and a TV stand.  Guess what? Right it didn’t fit. He has to come back today and get the rest. So much for the relaxing RV life today.

Now don’t get me wrong  I do get some down time and this is what I do. 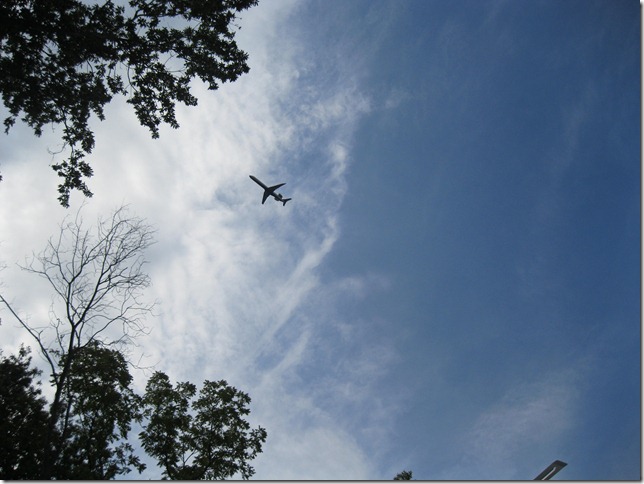 Yep I lay in my recliner and watch airplane’s fly over. After all some people have a railroad running thru their back yard. We are on the approach landing for Kansas City International Airport.

Its like everything you get use to it. Inside the 5th wheel you can’t even hear the planes.

Now don’t get me wrong I don’t want to seem like I’m complaining because I would not to trade going back to the S’s & B’s living.

It just feels like time is flying by to fast.

Posted by Kenny And Angela's Adventure at 5:01 AM 9 comments:

Here are the Five Rules for Men to Follow for a Happy Life that Russell J. Larsen had inscribed on his headstone in Logan, Utah. He died not knowing that he would win the 'Coolest Headstone' contest.

FIVE RULES FOR MEN TO FOLLOW FOR A HAPPY LIFE:

1. It's important to have a woman who helps at home, cooks from time to time, cleans up, and has a job.

2. It's important to have a woman who can make you laugh.

3. It's important to have a woman who you can trust, and doesn't lie to you.

4. It's important to have a woman who is good in bed, and likes to be with you.

5. It's very, very important that these four women do not know each other or you could end up dead like me.

Posted by Kenny And Angela's Adventure at 5:41 AM 8 comments:

Our Week With Old Blue

This was a good week here at the RV park the weather has been so nice we open the windows in the bedroom and turn on the attic fan on the roof and slept like babies.

We have been thinking about this years Christmas card and thought about a redneck Christmas here are some pictures in the running.

“ Old Blue keeping a eye out”

Friday we did take the hounds to a dog park in Leavenworth, KS. They ran out a lot of energy they have stored up since they don’t have a back yard to run in anymore.

Max paying his respect on a memorial for a dog and it’s owner. (Think he is part goat)

The park had a work out area. They only had one tunnel to work out on and Max’s get’s bored real easy.. (A.D.D)

This is how we spent Saturday I watched TV and “Old Blue” stood guard . (Short dogs)

I need to apologize to Annie for  getting only one picture of her and no ink on this blog. Next time will be your turn.

Posted by Kenny And Angela's Adventure at 5:16 AM 5 comments:

Keep skunks and bankers at a distance.

Life is simpler when you plow around the stump.

A bumble bee is considerably faster than a John Deere tractor.

Words that soak into your ears are whispered...not yelled.

Forgive your enemies; it messes up their heads.

Do not corner something that you know is meaner than you.

It don't take a very big person to carry a grudge.

You cannot unsay a cruel word.

Every path has a few puddles.

When you wallow with pigs, expect to get dirty.

The best sermons are lived, not preached.

Most of the stuff people worry about, ain't never gonna happen anyway.

Remember that silence is sometimes the best answer.

Live a good and honorable life, then when you get older and think back, you'll enjoy it a second time.

Don 't interfere with somethin' that ain't bothering you none.

Timing has a lot to do with the outcome of a rain dance.

If you find yourself in a hole, the first thing to do is stop diggin'.

The biggest troublemaker you'll probably ever have to deal with, watches you from the mirror every mornin'.

Always drink upstream from the herd.

Lettin' the cat outta the bag is a whole lot easier than puttin' it back in.

If you get to thinkin' you're a person of some influence, try orderin' somebody else's dog around.

Don't pick a fight with an old man. If he is too old to fight, he'll just kill you.

Posted by Kenny And Angela's Adventure at 5:42 AM 6 comments:

We had guest come camp with us this weekend and the weather was perfect.

Daughter Jessi husband Steve and the grandkids came with their two hounds and their class c to spend sometime with the old folks.

The son Blake showed up for a little visit then had better things to do, you know 22 and single and don’t have time to waste sitting with old people.

Angela and I took the twins swimming while the parents sat around the camp site and rested. I think they came so they had someone to keep the kids entertained.

And yes the poor girl has arms.

They had a ball playing in the water. After the nights being cooler the water was a bit to cold for me to get in. 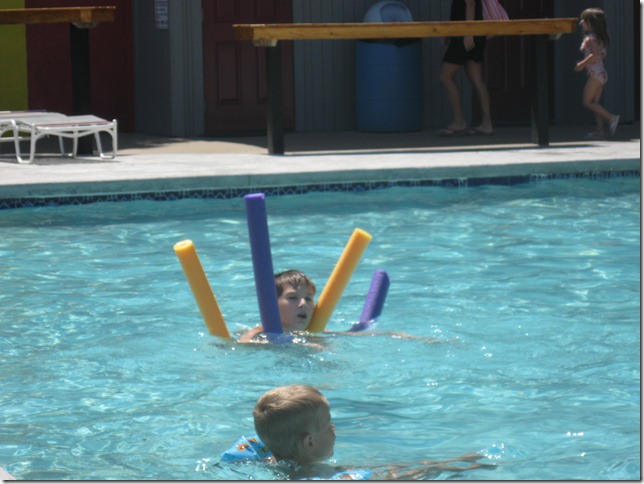 Angela and her camping buddy Mad Max,he thinks the table is his when he goes outside he lays on it to sunbath that’s his water bowl so he doesn’t have to get down to get a drink. (spoiled??)

Camp ground mascot at the pool monkeying around. Wish someone would have pushed him in to see if monkeys can swim.

It was good to see all the kids and we had a good time it was just to short.

Posted by Kenny And Angela's Adventure at 1:36 PM 10 comments:

This is a very sad story about a bear... Everybody should heed the warnings not to feed wildlife because they become dependent and don't forage for themselves any longer. It is such a tragedy to see what has been done to our country's wildlife. The photo below captures a disturbing trend that is beginning to affect U.S. wildlife.

Animals that formerly were self-sufficient are now showing signs of belonging to the Democratic Party. They have apparently learned to just sit and wait for the government to step in and provide for their care and sustenance.

This photo is of a black bear in Montana turned Democrat. He's nicknamed Bearack Obearma. It is believed that he has become a campground organizer.

Sorry I couldn’t help myself….

Posted by Kenny And Angela's Adventure at 5:59 AM 7 comments:

This week has been another hot one here at the park. Friday we sat around all day waiting to move to another site up on the hill that is a little bigger.

The site that we are in is on the camp ground’s main road  and on the weekend it is busy with the weekend crowd pulling in and people walking to the pool.

We waited and waited then around 3pm the guy showed up to get his rig ready to roll and we were all ready hooked up and ready to roll. Finely  at 4:30 we had made the big move.

View across the street 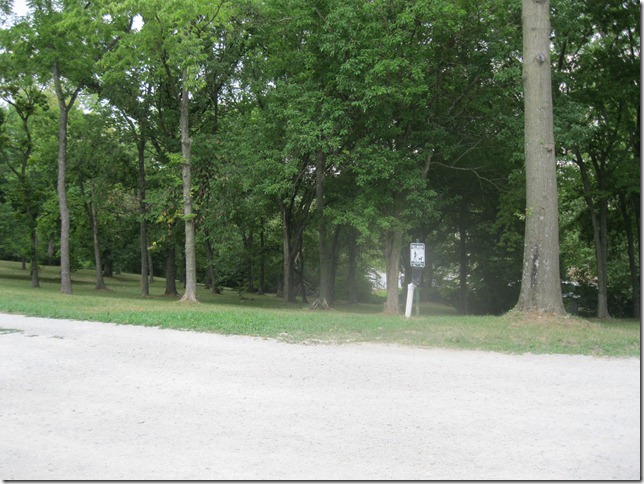 We haven't been in our spot 24 hours and  we have managed to piss the couple off next door .

The couple work here in the camp ground. The man came over Saturday morning and wanted me to move my trailer over farther in my lot so I was not blocking his satellite dish. Do What? For one thing after getting everything level and things put back in place he wants me to move over and make my lot smaller for his TV enjoyment? I don’t think I would have the guts to ask someone to do that.

And to top that off the couple on the other side pulled out Saturday morning also. I hope I didn’t offend them by walking around with my shirt off and my speedo…

We have managed to meet some nice folks the other night we went two sites down for a karaoke party.

This is one of the rigs that pulled in last week.. 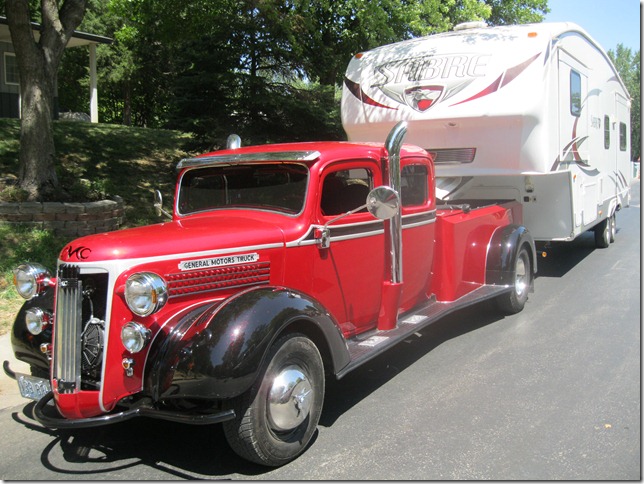 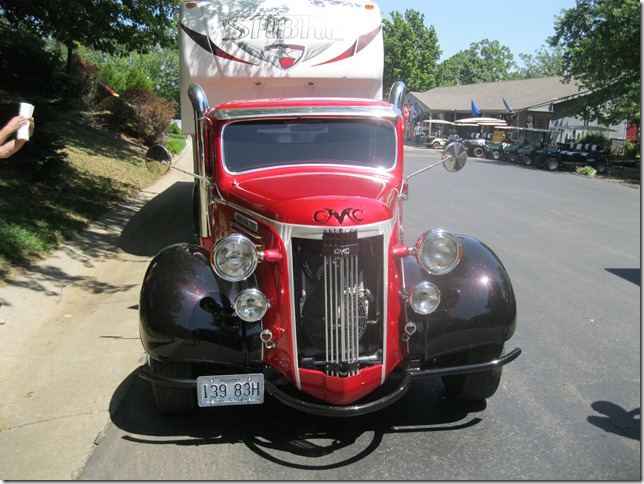 Posted by Kenny And Angela's Adventure at 6:52 AM 11 comments:

Well what did you expect?
They're submarines!
(Hope the rest of your day goes better!)

P.S. If it makes you feel any better, I looked at all the pictures, too!!

Posted by Kenny And Angela's Adventure at 4:05 PM 7 comments: