Angela got her first work camping job here at the rv park we have been at for over a year.

They had told her that they only hired couples and since I’m still working till Sept. they would not hire her.

They did not get all the work campers that was needed so she was ask if she wanted to work.

She is working in house keeping and now we get the rent and electricity after she works 18 hours per week and anything over the 18 she gets paid. Plus 1/2 off propane and free laundry. Not bad that saves us about $600 a month.

Sure wish that would had happened about a year ago. anyway it will look good on her working camping resume along with Amazon that’s coming up in Oct.

Angela driving her cute little house keeping van that drives on the right side. Being 5ft tall its just her size…

Posted by Kenny And Angela's Adventure at 2:43 PM 9 comments:

And The Winner Is??

Thanks for the help with my insurance question I had yesterday.

The winner is Epic Insurance in Sioux Falls,SD and Gina Shaver. I talk to a few others and received several quotes. I went with Blue Sky.

In the interview process some people just don’t have what it takes to be in sales. Its not only price but a little personality can go a long way.

http://theeastsheadwest.blogspot.com/ for sharing the info with me.

Posted by Kenny And Angela's Adventure at 10:30 AM 4 comments:

I Have A Question

I have a question for the full timers about insurance.

Since we are now full timers and are now residence of South Dakota who do you recommend for a insurance co.

Posted by Kenny And Angela's Adventure at 7:37 AM 8 comments:

Deadwood and Sturgis And Mount Rushmore

Friday we trip to Deadwood,SD nice town with a lot of history and a lot of people. This weekend is Wild Bill Hickock days and the little town was full. We didn’t hang around long. We will come back at a later time.

We then headed over to Sturgis,SD. I think everybody in town was over in Deadwood. It looked like the town was quite except for when bike week hits. The saloons are very large so you can tell they have a lot of people. 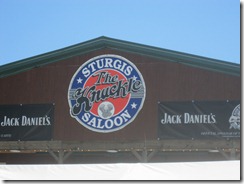 The Full Throttle Saloon advertise that are the worlds largest biker bar. 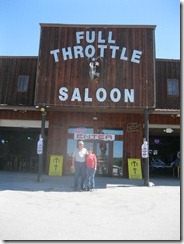 It was quite impressive and very large. 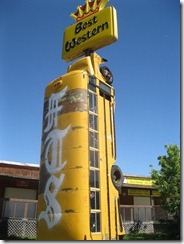 A cold beer and some T- shirts and we were done for the day..

Saturday was Mount Rushmore day. We have never been there before and was very impressed the drive to it on the Iron mountain rd. was so neat we love it. 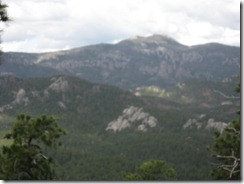 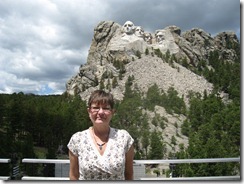 We found this little guy on the way down the mountain.

Our time is coming to an end here in the Black Hills today is clean up the 5th wheel and laundry day. We head out Monday.

Posted by Kenny And Angela's Adventure at 8:18 AM 9 comments:

Kicked Out Of Custer State Park

We got to Custer State Park late afternoon Tuesday. We had no reservation and could not fine any parking spot for us except in a campground with no hook ups it was getting late so we took it for one night. We had already traveled over 300 miles that day.

Our spot for the night in Custer state park.

Custer is not set up for big rigs as far as we could see. The truck got a good work out pulling some of the hills.

After being kicked out of Custer Wednesday because of a miner detail of no reservation we found a park down at the bottom of the big hill. Not as pretty as being in the park but full hook ups and for $92 for 5 days not to bad.

After we got set up we went to the town of Custer to check it out.

Had lunch at a great little hamburger place I had a buffalo burger witch was good Angela not wanting to try anything new had a regular burger. this was a mural on the side of the building.

After lunch we headed over to Hill City to look around. And of course Angela found someone to talk to.

Didn't  see much in Hill City of interest so we headed home via the Needles Highway wow what a ride.

I tried to load a video I took of a tour bus coming thru the tunnel but couldn’t get it to load what a site to see. Here are some pictures I found of the highway.

Posted by Kenny And Angela's Adventure at 8:03 AM 11 comments:

The Sun Is Up There

After days without sun shine it showed it self today..

We got all the address and vehicle registration done today wow so many forms to fill out.. We could not get our driver license done because they have a computer problem. We will just use our Missouri license till we can take care of it.

We had a great lunch at a place called  JL Beers and they had beers.

They also had great burgers. 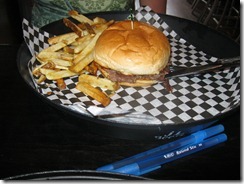 Angela always meets someone to talk to.

Posted by Kenny And Angela's Adventure at 7:08 PM 5 comments:

We are in Sioux Falls,SD got here Saturday and it has been cloudy and raining on and off since we arrived.

We are hear because we got accepted into the witness  protection program.

Ok Really to change our domicile.

We got out today even in the on and off rain to do some site seeing.

Went to the falls and two museum’s. Pictures to follow…..

Tomorrow we go to mail forwarding company and get the paper work flying and then we get out of here and have some more fun..

Posted by Kenny And Angela's Adventure at 6:47 PM 7 comments: