Life In The Hood

Wish we had some news to share like we sold the house or we won the lottery.

But neither one  has happened  as we sit here in the trailer hood. I go to work and Angela cleans,does laundry,cooking and goes to the swimming pool.lol

When I’m home I like to walk  Annie and I have started to notice and hope it’s not like this every where.

But when we walk around the park and especially on the weekends and a lot of the full-timers also can pass you on the street and act like they don’t even see you walking by. I’m not asking  them to  take me home. But a hello,hi or up yours would be nice… Anyway the park is packed for the weekend with kids riding bikes and the pool so packed you have to stand shoulder to shoulder.

We our trying to get a different site up the hill from here. We would have less weekend traffic and a bigger yard for the hounds.

We have had a few showings this weekend on the house so maybe something's going to happen soon. We hope

Posted by Kenny And Angela's Adventure at 5:38 AM 11 comments:

We who have taught, or love children who have been taught, know this is funny! From the diary of a Pre-School Teacher

Now that's funny, I don't care who you are.

Posted by Kenny And Angela's Adventure at 5:59 AM 5 comments:

First, we survived being born to mothers
Who smoked and/or drank while they were
Pregnant.

They took aspirin, ate blue cheese dressing,
Tuna from a can and didn't get tested for diabetes.

Then after that trauma, we were put to sleep on our tummies in baby cribs covered with bright colored lead-base paints.

We had no childproof lids on medicine bottles,
Locks on doors or cabinets and when we rode
Our bikes, we had baseball caps not helmets on our heads.

As infants & children,
We would ride in cars with no car seats,
No booster seats, no seat belts, no air bags, bald tires and sometimes no brakes.

Riding in the back of a pick-up truck on a warm day
Was always a special treat.

We drank water
From the garden hose and not from a bottle.

We shared one soft drink with four friends,
From one bottle and no one actually died from this.

We ate cupcakes, white bread, real butter and bacon..
We drank Cool-Aid made with real white sugar.
And, we weren't overweight.
WHY?

Because we were
Always outside playing...that's why!

We would leave home in the morning and play all day,
As long as we were back when the
Streetlights came on.

No one was able
To reach us all day. And, we were O.K.

We would spend hours building our go-carts out of scraps
And then ride them down the hill, only to find out
We forgot the brakes. After running into the bushes
a few times, we learned to solve the problem.

We did not have PlayStations, Nintendo's and X-boxes.
There were no video games, no 150 channels on cable,
No video movies or DVD's, no surround-sound or CD's,
No cell phones, No personal computers, no Internet and no chat rooms. WE HAD FRIENDS
And we went outside and found them!

We fell out of trees, got cut, broke bones and teeth
And there were no lawsuits from these accidents.

We ate worms and mud pies made from dirt,
And the worms did not live in us
Forever.

We were given BB guns for our 10th birthdays,
Made up games with sticks and tennis balls and,
Although we were told it would happen,
We did not put out very many eyes.

We rode bikes or walked to a friend's house and
Knocked on the door or rang the bell, or just
Walked in and talked to them.

Little League had tryouts and not everyone made the team.
Those who didn't had to learn to deal
With disappointment.
Imagine that!!

The idea of a parent bailing us out if we broke the law
Was unheard of.
They actually sided with the law!

These generations have produced some of the best
Risk-takers, problem solvers and inventors ever.

The past 50 years
Have been an explosion of innovation and new ideas.
We had freedom, failure, success and responsibility,
and we learned how to deal with it all.

If YOU are one of them?
CONGRATULATIONS!
You might want to share this with others
who have had the luck to grow up as kids, before the
lawyers and the government regulated so much of our lives
for our own good .

While you are at it, forward it to your kids so they will know
how "lucky" their parents were.

Posted by Kenny And Angela's Adventure at 6:44 AM 6 comments:

Life In The Hood

Our week here in the trailer hood has been a hot one. Boy we can’t wait for some cooler weather and I guess we are not alone in that.

The RV park is pretty quiet Monday thru Thursday and we get to use the pool without a lot of adults and kids,but come Friday the weekend crowd starts rolling in and then there goes the hood.

We have been eating well.

One of the campers that came in Friday had a small pickup load of sweet corn and gave us a bag full. He told us to take all we wanted,but with a small refrigerator we could only take about 8 ears.

It was so sweet I almost started eating it before it was cooked. Wish now we would have taken more.

Friday night the park had a concert at the amphitheater. We took the cooler and chairs and found the shade. They even had there own little groupie dancing to the band.

We have met a nice couple Jim and Jackie that have been workampers for a long time. Jim still works and Jackie takes care of the home on wheels. I have been picking their brains about the in’s and out’s of workamping  jobs. 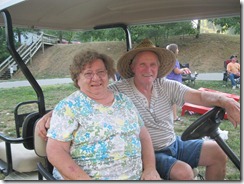 All is well in the trailer hood and just waiting for the weekend crowd to leave.

Posted by Kenny And Angela's Adventure at 5:12 AM 6 comments:

I was feeling a little nosey, so I thought I would look in on you and see if your sitting at your computer and if your ok.

YUUUUUP, there you are and you look great!!!

If this made you smile pass it along.

Everyone Needs A Smile Today!!!!

Posted by Kenny And Angela's Adventure at 7:09 AM 6 comments:

First Week At The RV Park

We just finished up our first week here at Basswood RV park.

Wednesday July 4th it was so hot just like most of the country we thought we would try out the pool.

When we got there this is what we found no one there.. We soon found out why,the water was warm as bath water.

The store here sells pizza and if you call it in they will deliver it to your site. If your ever around a place that sells Hunt Brothers Pizza give it a try. We think it is a really good pizza.

Angela and I don’t usually eat a whole pizza at one sitting but this was pretty good stuff. 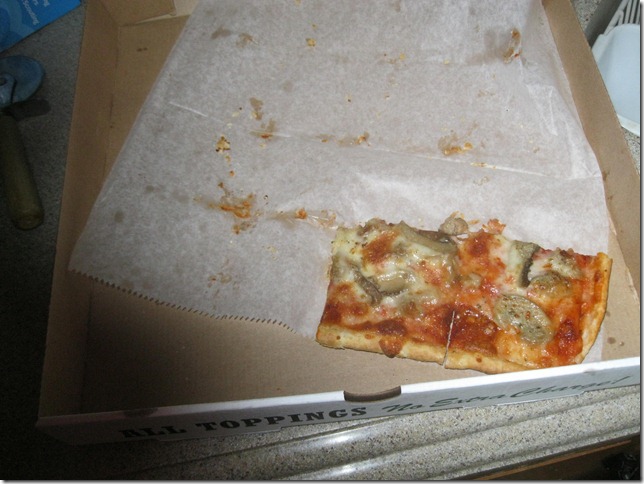 We  or should I say (I )learned a big lesson. Friday night I dumped the tanks and when I pulled the handle on the black water and it started down the stinky slinky like slow motion all of sudden the fitting came loose on the ground end and out it came on the ground kind of like in the movie Robin Williams RV I jumped and put it back on the hole and if course I had no gloves on..yuck double YUCK!!! Lesson learned. (Note to self check fittings before opening) Guess you can say S@#t happens!!

Hope everyone had a good week and maybe things will cool down a little so we can get out and enjoy the good life.

Posted by Kenny And Angela's Adventure at 4:57 AM 9 comments:

I hope this poem has the same effect on you as it did on me.

Walk With Me by the Water

well worth the read...

A BEAUTIFUL POEM ABOUT GROWING OLDER:

Shoot...
I forgot the words.

Oh well, they say a picture is worth a thousand words.

Posted by Kenny And Angela's Adventure at 1:18 PM 9 comments:

On Friday we decided that maybe the 5th wheel sitting in the drive way was over powering the sale of the house because of the size of it. We thought it made the house look small.

So with having our house on wheels we moved. We packed up and drove about 15 miles north to Basswood Country RV Resort in Platte City, MO. http://www.basswoodresort.com/

They have a few  long term monthly sites but we only had a few to choose from for our 36 ft. It’s not a great site but they said as soon as things slow down that we could get a better spot.

The only bad thing is I have to drive about 20 miles to work instead of the 3 miles from the stick’s and bricks and I won’t be coming home for lunch. Oh well we have to give something's up to get on with the dream.

They have a nice pool so when the crowd leaves after the 4th of July we can try it out.

The office and country store that is well stocked. 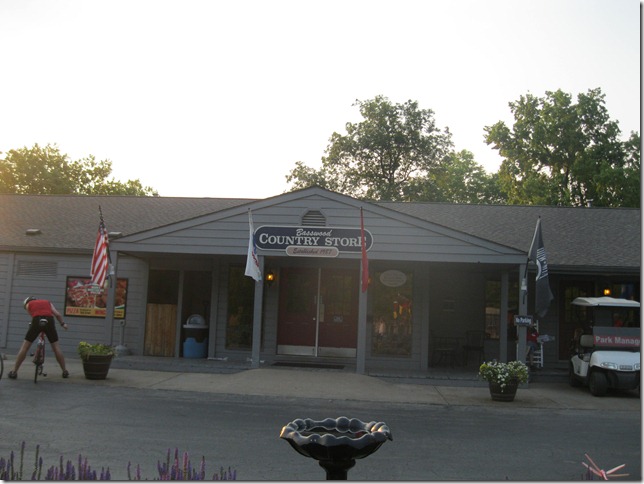 We have several ponds that are stocked with fish I can use. Maybe when it gets cooler. Annie has her eye on this one. 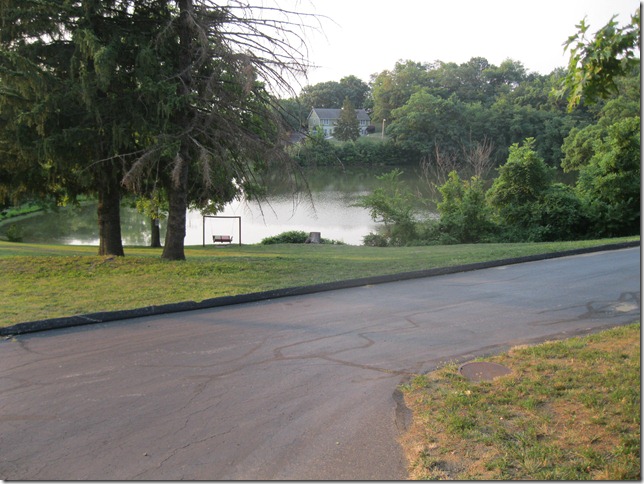 The main road up to our site.

If anyone is headed this way and looking for a stop over this is a nice place. Let us know if you do we would love to meet you.

The only draw back to this place is they don’t have a dog park,so I have to get off my back side and walk them.

Saturday they had a golf cart parade.

Posted by Kenny And Angela's Adventure at 5:10 AM 10 comments: