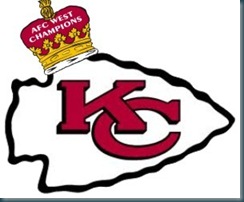 The city of Kansas City has turned to a sea of red this week. Just in case you have been out of touch or boondocking and have not heard the Kansas City Chiefs are the 2010 AFC West Division Champions. They are playing the Baltimore Ravens here in Kansas City  Sunday at 12:00 PM CST at Arrowhead Stadium. And if you want a ticket  you better dig real deep.

Chiefs fans take there tailgating real serious they will line up at the gates early and  wait to pay the $22 parking fee . The gates open 3 1/2 hours before game time and they come in with all kinds of equipment for the party. If course it’s KC the Bar-B-Que capital of the world you won’t be able to see the cars in parking lot with all the BBQ smoke. 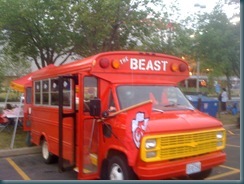 Arrowhead Stadium is one of if not the loudest fan stadium in the NFL and I think the best looking out door stadium in the country. The stadium opened in 1972 and last year under went a major remodeling. 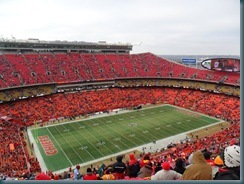 Kansas City is going in to the game a 3 point under dog so they better bring a couple cases of this. 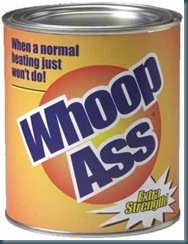 So they can do this 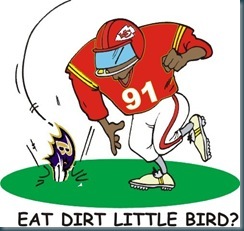 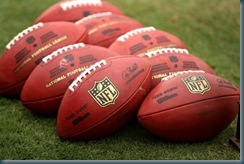 Posted by Kenny And Angela's Adventure at 4:56 AM

WHERE DO YOU GET THOSE CUTE ILLUSTRATIONS FOR YOUR BLOG...I AM CLUELESS..LOVED IT!! AND BY THE WAY,,,,GO CHICAGO BEARS!!!

Good luck Chiefs! I'll be watching and cheering them on!

Four Windows with a View said...

Will I be heckled, boycotted, ignored if I mention that football does nothing for me and I just don't get the interest? I even share fences with a famous quarterback and I still don't care.

Pass the tissue! We 'bout cried at the poor performance today! Maybe WE should have brought our own cases of Whoop Ass!
Oh well...K

SOrry about that loss. We did our part for the motivation with the "GO CHIEFS" card stunt.